Click the Green Editorial Tab Above!
Interest Rates Are Moving Up, How Does That Impact You? by PPCLOAN's Steven Kemper..

The predominant transaction type financed by PPC LOAN in the Fourth Quarter of 2014 was the sale of a $3 Million Earned Premium agency (or larger) with an Outside Buyer as the purchaser. The end result was that these larger-sized agencies sold for an average multiple of 2.79 during the Fourth Quarter of 2014, leading the way to a third straight quarter of growth in Allstate Agency Values as measured by the Simple Average.

Smaller-sized agency owners who are targeting a growth goal of $3 Million in Earned Premium or greater certainly get excited about the additional commission income received when growth is realized, but quite possibly the greatest result of agency premium growth is the ability to demand a higher multiple for the agency at the time of sale. Selling a large-sized agency for a higher multiple results in a significant increase in an Allstate Agency Owner’s personal net worth, a perk that cannot be overlooked when weighing the costs associated with pursuing agency growth. The market of agency purchasers have stated loud and clear that they prefer the opportunity to purchase a large-sized agency as the numbers continue to support higher multiples for agencies with Earned Premiums in excess of $3 Million.

“What is the right multiple to pay for an ADB qualifying agency?”

If not daily, it is certainly a weekly event that PPC LOAN receives a call from a prospective Allstate agency purchaser looking to buy a small-sized agency that qualifies for the Agency Development Bonus program “ADB.” It is almost always the case that the buyer in question has some level of heartburn as to what they want to pay for this smaller-sized agency. They don’t always know how to articulate it, but these buyers are trying to rationalize paying their seller a premium for the perks Allstate provides through the ADB program.

To answer this question, I think we must first realize the purpose of the ADB program and how critical it is that each Agency Development Bonus dollar be reinvested back in the business for the pursuit of premium growth. No buyer purchases a $750,000 Earned Premium agency hoping to grow it to $1,000,000 in Earned Premium. With debt payments, one or two staff salaries, rent and advertising costs, you simply cannot make a living. Buyers want to realize significant growth to the point that their cash flow is strong and they have a business that has real value. To realize this goal, ADB money must be used for agency working capital and not used to pay a premium to the previous owner in the form of an inflated purchase price.

It will be interesting to watch how the market of agency purchasers and agency sellers negotiate price multiples for agencies that qualify for the ADB program. I feel strongly that any debt service associated with the purchase of a small-sized agency needs to be repaid with the renewal commission on those policies that were purchased. Any “premium” paid to the seller for the benefit the buyer is going to receive by being ADB qualified will impede the buyer’s ability to succeed in growing the agency and defeat the purpose of the ADB program.

During the First Quarter of 2014, larger-sized agencies with new and renewal commission income of $300,000 or greater represented only 21% of agencies sold. During the Second and Third Quarters of 2014, these largest sized agencies represented more than 50% of the total, and have now peaked at 61% in 2014 Q4.

With larger-sized agencies selling for the largest multiples, the simple average has increased during the last three Quarters of 2014, as agencies with more than $300,000 in New and Renewal Commission income represented a larger percentage of total sales. This trend reminds us of the importance of focusing on the sales multiple for each size group. 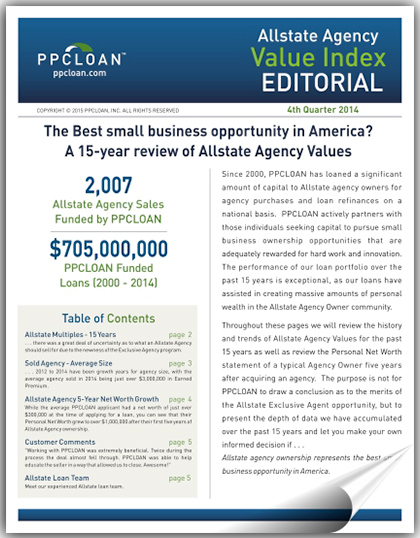