Click the Green Editorial Tab Above!
Interest Rates Are Moving Up, How Does That Impact You? by PPCLOAN's Steven Kemper..

The simple average for agency values has reached 2.66 times for the first time since 2008. Agency values for each agency size group are also up, as seen in the chart below. A deeper analysis of agency sales occurring in the Third Quarter of 2014 reveals that Existing Agency Owners purchasers are contributing greatly to this increase as their average buying multiple was 2.87 times for the Quarter.

There are two interesting discussion topics that have emerged during the Third Quarter of 2014. One supports the headline of agency values being up, and the other is simply interesting for the rarity of its occurrence. The two are described in more detail below:

This increase of Approved Buyers has allowed many sellers to receive a higher sales multiple as both Outside Buyer and Existing Agency Owner alike have made competing offers for an agency purchase. As is always the case, Existing Agency Owners must present a compelling business case to receive “Approved Buyer” status, which can include hitting various performance metrics and outlining growth strategies, along with presenting a comprehensive business plan.

It is especially worth noting that Existing Agency Owners typically come to the table with strong purchasing power, utilizing the equity in their existing business to secure high levels of financing. As a purchaser of agencies, Existing Agents paid far more than the average (or Outside Buyers for that matter), and they did it because they can. Let’s examine some of the “Why’s” for Existing Agency Owners who are seemingly paying a premium for a satellite purchase:

Don’t want to miss an opportunity

Many Existing Allstate Agency Owners around the country have voiced their desire for ownership of additional Allstate premium dollars. This significant desire to own additional Premium dollars is now an opportunity many top performing agents can execute on, and they are viewing the opportunity as “too good to pass up.” As a result, existing Allstate agents are making aggressive purchase offers when a quality buying opportunity presents itself, significantly contributing to this Quarter’s upward trend of agency values.

Many existing agents are making a top dollar offer to purchase a satellite because it gives them a greater presence in a desired market area. Having a larger geographic footprint, along with greater access to commission dollars, makes it easier to substantiate the deployment of resources for the purpose of agency growth.

Additional profit is gravy, not necessity

Beyond just their desire to purchase additional premium dollars, existing Allstate Agency Owners are in a unique buying position as they simply are able to pay more for a purchase than your typical outside buyer. Utilizing the equity in their existing agency contributes to an agent’s purchasing power, something an Outside Buyer does not have at his or her disposal.

In most instances, an existing Allstate agency owner is providing for their personal living needs from the cash flow of their existing agency, and any profits from a satellite purchase simply represents “gravy.” This is not the case with Outside Buyers, as they typically need every dollar of cash flow to support their personal living obligations and pay business overhead, along with business purchase loan payments.

For further analysis of this topic I invite you to take a look this Quarter’s Editorial which is titled “How Deals Get Done.” In this editorial I examine the various types of acquisition opportunities we see and the financing package that are put together to make these deals work. The Editorial includes an analysis of Outside Buyers and Existing Agency Owners, along with agencies qualifying for ADB and those at scale.

2. No merger transactions in the Third Quarter of 2014

Since I began tracking the nature of an agency transaction back in 2008 (satellite purchase, merger or split agency), this is the first quarter I have on record where PPC LOAN was not asked to participate in the financing of a merger transaction.  I will continue to watch and report on merger activity going forward.  Certainly, the lack of merger activity has not adversely affected the value of agencies.

During the First Quarter of 2014, larger-sized agencies with new and renewal commission income of $300,000 or greater represented only 21% of agencies sold during the Quarter. During the Second and Third Quarters of 2014, these largest sized agencies represented more than 50% of the total.

With larger-sized agencies selling for the largest multiples, the simple average has increased during the Second and Third Quarter of 2014, as agencies with more than $300,000 in New and Renewal Commission income represented a larger percentage of total sales. This trend reminds us of the importance of focusing on the sales multiple for each size group.

How Deals Get Done

I wanted to take a look at the various types of financing requests PPC LOAN received, then examine the aspects of the financing packages that were ultimately accepted to consummate the acquisition. I think it is of importance for the market to understand what typical financing deals look like from a structural standpoint, as every small business owner is a seller at some point in their career. Knowing how financing is typically structured is a vital component of retirement planning.

Through this examination process, I reviewed the three most common loan requests that PPC LOAN receives:

Before I share my findings, I want to point out that what I am reporting is not the financing structure of a single deal, but rather the average of a handful of deals for the specific example analyzed. I want Allstate Agents to have an idea of what a typical financing transaction looks like. Here are the results of what I found.

For this size group PPC LOAN was regularly asked to finance just under $1.5 million in Earned Premium to allow for the maximum book size to be purchased under the Outside Buyer Test Program where new candidates receive 80% of the Start-up Agency Development Bonus (ADB). Typical financing for these deals had the following specifications:

Buyers who qualified for agencies in this group typically had strong sales experience (inside or outside the insurance industry), their credit score was typically well over 700, and their personal living obligations were very modest. Having low personal living expense needs was one of the major requirements to get a loan to purchase a smaller sized agency. From an underwriting perspective it is deemed imperative that the agency buyer take as little cash out of the business as possible for personal expenses (mortgage, car, etc.), as the cash is best served remaining in the business for growth purposes. Those candidates best able to take advantage of the ADB/enhanced commission program were granted an approval for the purchase of these loans, and, as noted above, their cash down payment was on average only 7% of the purchase price.

Scale Agency Purchase by an Outside Buyer

This is likely the most common financing request PPC LOAN receives. This group typically represents fairly sophisticated Outside Buyers looking to make a career change and join Allstate Insurance. They have quality professional experience and have historically made a good living. They are looking for an acquisition opportunity that will provide instant cash flow along with upside potential. Typical financing for these deals had the following specifications:

Existing Agency Owners purchasing a Satellite became a more common request received by PPC LOAN in 2014. In reviewing this group's performance through CSRP and other agency reports, they are outperforming their peers in production and growth, hence validating their approval to purchase by Allstate Insurance. All agency owners who have requested financing through PPC LOAN have had significant equity in their existing agencies. Typical financing for these deals had the following specifications:

Utilizing the equity in their existing agency, Existing Agency Owners are able to secure 100% financing, while paying a premium relative to Outside Buyers. In this example, the existing agency owner was able to secure 100% financing all while paying 2.93 times. The Outside Buyer purchasing a similar sized agency for just 2.60 times was required to put down cash or convince the seller to take back a note to get the deal done. 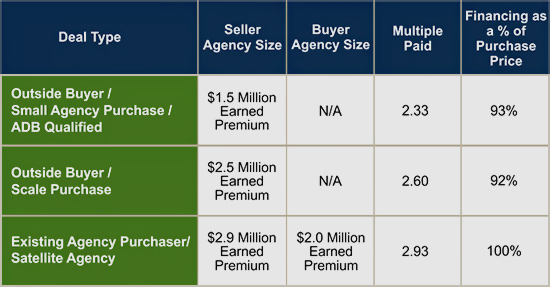